What is a pre-sale?

What is a pre-sale?

Example scenario: When the developer intends to build an apartment building and applies for financing, the bank will grant financing under certain conditions. One of them will likely be a certain percentage of pre-sales the developer will need to secure before receiving the funds.
It is common practice for a developer to approach several real estate investors and offer them an opportunity to purchase units of the non-existent building at a discounted price, and on good terms.

Once the number of pre-sales is accomplished, the developer goes ahead with the construction, which will likely take two years or longer to complete. During construction, their marketing team offers the remainder of the units for sale at market value to the public.
If you are a RE investor, you know that it is preferable to be buying at the pre-sale prices, not market value prices.

The question is, how do you get the invitation to buy a pre-sale?
In the past many years, investors have made substantial income by buying at wholesale prices and selling at retail prices even before they needed to complete their purchase. I saw many of them lining up and sometimes even camping overnight in front of the sales center to get a chance to buy at lower prices, but not everyone was lucky enough. You needed to be well-connected to get an opportunity, and you had to act fast.

Today is a bit of a different story. Several projects in the Lower Mainland and Fraser Valley offer really good prices and incentives to secure a unit now and complete the purchase two or three years later. The list of incentives varies from one project to the next. Besides attractive prices, you can get low deposit amounts (5-15%), low or no assignment fees, free updates, a mortgage rate buy-down program, extra parking and more.

A month ago, I helped a few of my clients purchase a presale in Surrey that sold out in 2 days, and I know of another good developer that will be offering a few units for sale as well.

If you would like to know more about these opportunities, I would encourage you to call or email me, and I’ll be happy to send you details on those projects. 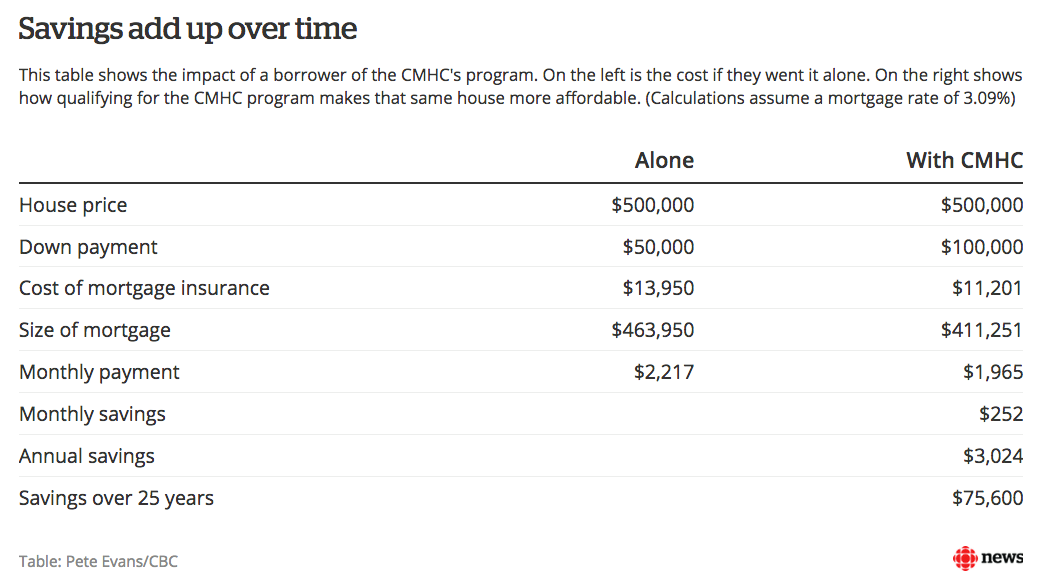 When a property is being sold, “AS IS, WHERE IS”

The Entire Property Being Sold “As-Is”
When the entire property is being listed and sold “as-is”, the seller will not make any repairs, nor offer any credits for potential defects of the home or grounds.

Some examples of major defects that the seller would not have to correct might include:

It’s very important to have a home inspection so you’ll be prepared to make any repairs yourself upon possession. There are also circumstances that don’t guarantee that the home will be in the same condition as when you viewed it, or that the appliances will still be present when you get the keys to the home. These are all chances you take when buying “as-is, where-is”, so make sure you have professionals walking you through the process and you do all your research beforehand.

Avoid the Following Financial Sins When Applying For a Mortgage

Great News for the Gulf Islands

B.C. Finance Minister Carole James will exempt the Gulf Islands and cottages in rural areas from the government’s new speculation tax, part of a suite of reforms she unveiled Monday to respond to weeks of criticism that the new tax unfairly penalized British Columbians.
The  changes include limiting the geographic areas of the tax to Nanaimo and Greater Victoria, exempting Parksville, Qualicum Beach, the Gulf Islands and Juan de Fuca areas that had originally fallen under the regional districts in both areas that were to be subject to the new tax.
Metro Vancouver’s scope is tightened too, with the original Fraser Valley location being reduced to Mission, Abbotsford and Chilliwack, meaning Kent, Hope and Harrison Hot Springs are now exempt. Bowen Island is also exempt. Whistler, which is suffering a rental crisis, was not included  in the tax. However, the municipalities of Kelowna and West Kelowna remain part of the tax, despite a request to government to be exempted.

Since we have officially entered a “buyers market,” here are a few tips on how to sell your house faster and for more money then your competition.

If you’re looking to buy (or sell) a home, it’s important to know which type of market you’re entering into. If you’re unsure, ask your real estate agent. Of course, selling a home in a seller’s market is optimal, as is buying a property in a buyer’s market. But people don’t necessarily have the luxury of timing their home sale or purchase to coincide with the most advantageous market. It could be quite likely, for instance, that you’d be buying in a seller’s market or selling in a buyer’s market.

Tips on selling your home in different housing markets

Selling in a seller’s market is generally quick and easy. In a buyer’s market, with an abundance of properties sitting idle, you may want to do some legwork to help sell your home. There are a number of things you can do to improve your chances for making a sale. These include:

If you’re looking to buy or sell and would like assistance, please give me a call and I’ll be happy to assist.

Get to know the Pros and Cons and the best option for you.

There once was a time when renting your entire life may have made reasonable financial sense. It was only a generation ago that mortgage rates were in the double digits and affordable rental units were aplenty. But over time, borrowing rates have fallen, and in major centres in Canada, rental rates have skyrocketed.

It now appears the attitude among Canadians is to buy as soon as you possibly can. While home ownership is a truly rewarding goal to achieve, you really need to assess your own situation to ensure you are making the best decision.

Below is a little graph to help you decide whether you should stay a renter or take the plunge and buy. If buying is not an option for you yet, get a head start by learning the in’s and out’s of the home buying process.If home ownership is a serious goal, partner with a mortgage broker in your area to discus your individual situation. As far away as the goal may seem, you might be surprised how a professional can help you get your foot in the door – or at least in the right direction! 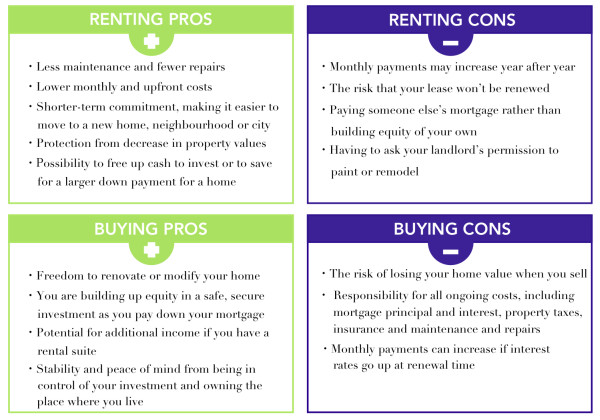 – 4 in 10 households spend more than 30 percent of their pre-tax income on rent, this is above the commonly accepted affordability threshold.

Talk to anyone renting a place in a large city like Toronto or Vancouver, and you’ll probably hear a common complaint: Rental units are hard to find and very expensive when you do.

The most recent comprehensive market survey by the Canada Mortgage Housing Corp. would seem to back up those claims. According to CMHC’s rental market report published in late fall 2018, the national vacancy rate has dropped to 2.4 per cent, while the average rent is $987.

But a closer look at the report paints a stark picture in the larger markets. The largest increases in average rent for two-bedroom apartments from the previous year were in B.C., more specifically in Kelowna (+9.4 per cent), Victoria (+7.6 per cent), Abbotsford-Mission (+8.2 per cent) and Vancouver (+5.5 per cent).

Montreal, Calgary and Edmonton saw increases in rent by 2.8 per cent, 1.5 per cent and 1.3 per cent respectively

Here is a great tool that everyone looking for a property and a mortgage should have.

My Mortgage Toolbox is a new mobile app from Dominion Lending Centres designed to be a pocket-sized mortgage guide for everyday Canadians. A first-of-its-kind for the industry, the app makes it easy for consumers to find a mortgage broker nearest them and get the best mortgage product at the lowest rate available.

My Mortgage Toolbox guides the users while taking away all the stress of getting a mortgage.

Some of the feature of the app include:

The app has also been translated into several languages including English, French, Spanish Chinese and Hindi.

If you wish to talk to a Mortgage Professional, we recommend contacting Linda Fleming or Matt Robinson at 604-852-1703.

I have been watching this case for couple of years. I must say, the latest information to unfold has brought some clarity into an otherwise confusing issue of property disclosure.

The Buyer had tried to break contract after learning a man with ties to crime had been murdered there.

A Vancouver woman has won her appeal and will not have to pay damages after she failed to tell a homebuyer that someone had been murdered on the sidewalk of her property.

The BC Court of Appeal on Tuesday reversed a lower court ruling that had said Mei Zhen Wang had misrepresented the sale of her $6.1-million Shaughnessy mansion.

Justice Mary V. Newbury wrote in the decision that Wang could not have known that the home buyer, Feng Yun Shao, would have any “sensitivity” to the killing of her son-in-law, Raymond Huang, in 2007 and that that did not alter the quality of the home or its usefulness.